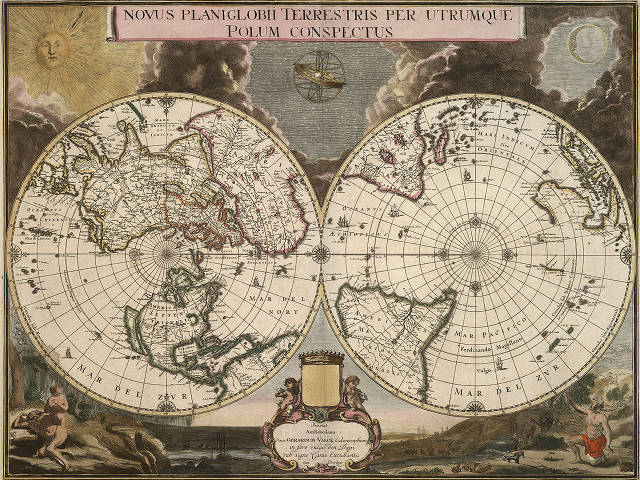 One of three surviving maps by Gerald Valck, from the Boston Public Library collection.

You may remember the final episode of the three-part Only Fools and Horses 1996 Christmas Special entitled Time on our Hands. After several episodes of Del and Rodney saying “this time next year, we’ll be millionaires”, the brothers find they’ve been holding onto a fortune for fifteen years. That of a rare J. Harrison pocket watch. A real life equivalent of this was found early this week: one of three engraved maps by Gerald Valck.

In the seventeenth century, Gerald Valck was noted for his engraved maps of the world. The Amsterdam born engraver created many portraits, though his atlases and printed globes were his most famous works. One of his three surviving maps were found underneath floorboards beside a chimney at Drumnahoy House. In the 17th century, Drumnahoy House in Aberdeenshire was part of the Castle Fraser estate.

On the 07 June, the map was returned to Castle Fraser. It is now on public view in the home of Clan Fraser throughout this summer. Robert Paterson, present owner of Drumnahoy House said in The Scotsman: “I am absolutely delighted that the restored chimney map is coming home to Aberdeenshire for display. The chance discovery of the map – hidden in my home for so many years – and its subsequent restoration make for an interesting story.

Castle Fraser is owned by the National Trust for Scotland. This year, it has formed part of their On the Trail of Bonnie Prince Charlie and the Jacobites publicity drive. The castle has also featured in the Helen Mirren film The Queen.