It is a well-known fact that Romans were expert engravers and this is one of the main reasons why so many of their artefacts have lasted throughout the ages. Whether referring to the infamous “Ides of March” coin or their numerous pieces of handcrafted jewellery, the skills that their craftsmen possessed rivals those which are exhibited by today’s artisans. 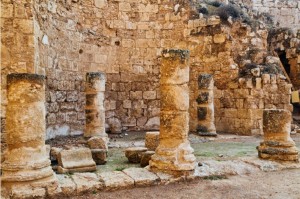 What is perhaps even more interesting is that we are still discovering relics and these continue to shed light upon such a unique culture. One recent example can be seen in an ancient copper ring that might have belonged to none other than Pontius Pilate himself.

This ring was first unearthed in 1969 when the burial tomb of King Herod was discovered by archaeologists. It was present alongside countless other relics and while considered to be important in terms of hits historical significance, it took researchers another 50 years to appreciate the significance of its embedded inscription.

The ring is fashioned from an alloy of copper and it bears the name “Pilatus” which appears to refer to the man who was said to have crucified Jesus Christ. Depictions of wine vessels surround the word and it is thought that this ring would have belonged to an individual of some wealth. As the name was quite rare at the time, historians have come to believe that this ring was meant for royalty.
More Than Adornment Alone
The Romans were famous for their signet rings. Not only were these intended to be used as jewellery, but their engraved surfaces could be used to stamp items such as legal or military documents. It therefore stands to reason that this artefact was owned by someone who enjoyed a significant status within the Roman cavalry; another title that was known to be held by Pontius Pilate.

When we also take into account the fact that the ring was found in a fortification known to be used by King Herod, there is little reason to doubt its authenticity.

This stellar example of ancient Roman craftsmanship clearly illustrates that metalworking and engraving have existed for millennia. While the methods themselves have changed, there is no doubt that talent is still required to create such works of art. Would you like to know the options provided by Able Engraving and Design? Please speak with a representative to learn more.